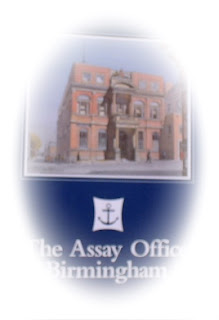 The Birmingham Assay Office was opened in 1773 and operated from rooms above the King's Head public house in New Street. Determined lobbying by Matthew Boulton and the industrialists had secured Birmingham the right to its own assay office. Previously the nearest office had been Chester and goods had to be sent there for hallmarking. With a growing jewellery quarter this infuriated the traders.


The current building in Newhall Street was built in 1877. The Assay Office Birmingham mark is that of an anchor which may seem strange considering that Birmingham is so far from the coast. It is thought to have originated from the name of the Crown and Anchor public house where much of the committee work took place in petitioning Parliament.


The role of the Assay Office is to test and analyse the content of precious metals and to ensure the quality of the product before it is sold, thereby guaranteeing the authenticity of the precious metals content and quality. Assaying is the weighing of a sample for purity purposes. With gold in the UK this takes the form of four legal standards of purity which are 9, 14, 18 and 22 carats.


British Hallmarks are respected around the world for their accuracy and authenticity and hallmarking is essential to protect the consumer. Strict laws apply to traders who do not follow the rules.