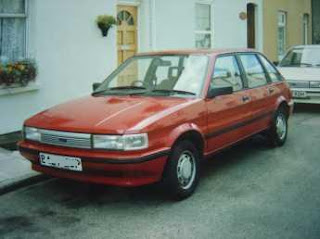 The Austin Maestro from British Leyland was built between 1983 and 1994. The Montego was based on this although sold as an estate car with the necessary modifications.


British Leyland was still struggling in the early 80's and the government was not forthcoming with funding to keep it going. The darkest days of "Red Robbo", Derek Robinson, the union convener that single handedly takes much of the blame for the demise of Leyland, were still a stigma on the company reputation and one which they would never be able to shake off.


Enter the Maestro. Despite what people may have said about its looks this was a practicle and reliable vehicle for many. It was never going to be a show stopper but nevertheless it attracted a loyal following.


The Maestro remains today as one of those cars you either loved or hated. It was produced at the former Morris plant in Cowley, Oxfordshire but it tried to compete head on with smoother and more aerodynamically pleasing generation of cars like the Ford Sierra, Escort and Vauxhall Astra. Despite this it was reasonably successful when compared with the Austin Allegro.

The production of the Maestro ceased in 1993 and its fate was sealed when BMW bought the company in 1994. In 2003 the tooling for the Maestro was acquired by a Chinese company called Etsong who put it back into full scale production but used the Montegro front to enhance its design.