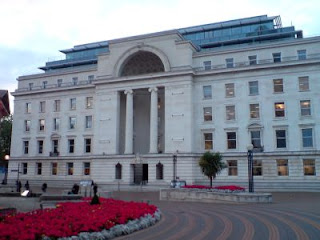 Baskerville House is one of Birmingham's most famous landmarks. It looks older than it actually is and it is built on a site that was once the home of John Baskerville.

This magnificent building was built in the 1930's and is Grade II listed. It used to be the home of the Civic Centre for Birmingham City Council.

Construction commenced in 1938 but was suspended with the outbreak of the Second World War. As a Civic Centre the building housed the Planning Department and the Economic Department. In 1998 the City Council moved out and plans were drawn up for conversion to a Radisson Hotel. This never materialised and neither did plans to house the Central Library within its walls.

The building was finally sold to Targetfollow who contracted Mace to project manage the new development and convert it into offices with a health club at an approx cost of £30 million. Internally the building offers eight storeys of prestigious office space in the centre of Birmingham. It has a glazed roof that helped to create a further two floors during refurbishment. This really is as good as it gets in terms of office space.

On site conference facilities, meeting rooms and state of the art IT facilities in an air conditioned secure and modern environment make this a desirable business location.
The building has won several awards for excellence.