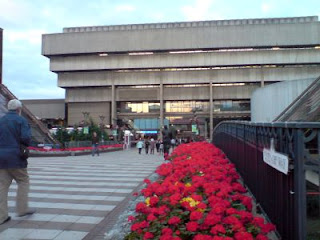 Birmingham Central Library is one of the largest and most important public libraries in Europe and the main Library for Birmingham.


This Brutalist building houses an enormous collection on several floors. It is situated just off Centenary Square or Chamberlain Square depending on which side you approach it from.

Opened in 1974, the building was designed by John Madin, an architect from Birmingham. It has fallen under much criticism over the years for its resemblance to a bunker.
Despite the comments this is one of the busiest buildings in the city and the walkway through the centre of the library is permantly bustling with people. Over 5,000 visitors pass through here daily.

The collections of this library include some historical works of national importance. Examples would include the Boulton and Watt collection, the archives of the Bournville Village Trust and the Railway and Canal Historical Society Archives.

Over the years there have been several attempts to demolish the library and replace it with something more modern. However, land was finally set aside between Baskerville House and The Rep in 2006 for the new library project. The task was to create a new and world class landmark building.

In 2008, Mecanoo Architecten, a Dutch firm of architects, were announced winners of the design competition and a launch event in April 2009 showcased plans for the new Library of Birmingham.

At a cost of £193 million, the new library in Centenary Square will be a major landmark and a first class flagship building for Birmingham city. The new building will have 31,000 square metres of floor space and will connect with the Rep at ground level.

For further information about this spectacular project visit:http://libraryofbirmingham.com