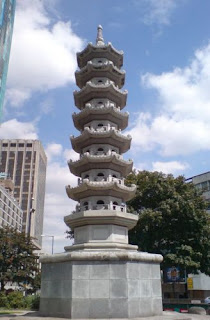 The Chinese Pagoda is a familiar and well recognised landmark in the city of Birmingham. It was financed by the Wing Yip Company, a local Chinese business.

The Pagoda symbolises Chinese tradition in Birmingham. It is made of marble and stone and was carved in China. The Chinese Quarter is situated  nearby.

Unveiled in 1998 and situated in the centre of the Holloway Circus roundabout, this traditional pagoda has a small Chinese garden area around it. It originally cost £90,000 and weighs 86 tons. The Pagoda is particularly attractive at night and lit up in various colours.

A plaque on the Pagoda reads:

Holloway Circus improvements 1998 This Pagoda erected here was quarried and crafted by hand in Fujian Province China using tradtional methods. It was donated by Wing Yip and Brothers ( Holdings ) Ltd, to the people and city of Birmingham. The structure was erected in Thomas Gardens to create a gateway feature into Birmingham's Bull Ring and market quarter and was implemented by Birmingham City Council European Regional Development Fund.