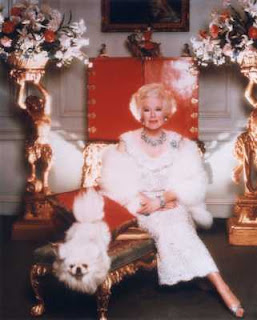 The story really begins in Scotland where there is a village named after the Cartlands and where the family are reported in ancient Chronicles as being in Lanarkshire as far back as AD 1200. Some of the Cartlands moved south and Barbara Cartland's Great Grandfather had an estate in Worcestershire. At the time of the Industrial Revolution in 1840 he moved to Warwickshre and built a large house in open countryside at a place which is now known as Kings Norton in Birmingham. A wealthy man with a Brass Factory in Birmingham, his second son, James Cartland, became a great Financier and Barbara Cartland's Grandfather.


James Cartland helped to build up the City of Birmingham and was twice offered a Baronetcy and a Knighthood - all of which he refused. James married Flora Falkner who was a direct descendant of King Robert the Bruce of Scotland. The couple only had one son, James Bertram Falkner Cartland, who fell in love and married with Mary ( Polly ) Hamilton Scobell. The couple moved to Worcestershire and on July 9th 1901 at Vectis Lodge, Edgbaston - Barbara Cartland (Mary Barbara Hamilton Cartland ) was born.


The family, were originally born into an enviable degree of middle class security, but the suicide of her paternal grandfather left them short of money. The family were forced to move to Amerie Court in Pershore. Tragedy struck once again when Major James Cartland was killed in France in the final weeks of the ending of the First World War. Barbara Cartland was just seventeen. When asked by her mother where she would like to live, Barbara Cartland chose London and the family, including her two brothers Ronald and Anthony, subsequently moved to the capital. Her enterprising mother opened a London dress shop to make ends meet "Poor I may be," Polly Cartland once said, "but common I am not". Anthony and Ronald would both be killed in battle, one day apart, in 1940.


After attending Malvern Girls' College and Abbey House, an educational institution in Hampshire, Cartland became a successful journalist and a gossip columnist. Her first novel, "Jigsaw," was published in 1923. It was a huge success and Barbara Cartland began to write seriously in order to earn money.


In 1927 Barbara Cartland married Alexander George McCorquodale, a former Officer of the Argyll and Sutherland Highlanders who was heir to a British printing fortune. They had a daughter called Raine who became "Deb of the Year" in 1947 and much later the stepmother of Diana, Prince of Wales.


In 1935, Barbara's brother, Ronald, was working in the Conservative Central Office and anxious to become a candidate in the Labour held Kings Norton Division of Birmingham. In those days a Member of Parliament had to pay their own expenses of around £1,000. Ronald was only earning £4 a week.


These were turbulent times for the family as Barbara, had now divorced her husband whose family confiscated his money and left Barbara and Raine, aged four, with a Marriage Settlement of £500 per annum. The divorce involved charges and countercharges of infidelity and Barbara Cartland would later marry one of the men Alexander McCorquodale accused her of dallying with, his cousin - Hugh Mc Corquodale.


At this time Barbara Cartland was writing for a weekly magazine and several newspapers but always under an assumed name so that no one knew who the writer was. Determined that her brother should stand for Kings Norton she wrote 10,000 words a day in order to pay for his Election Expenses. The house that her Grandfather had built was still in Kings Norton. Labour decided to field a well known politician. Barbara Cartland wrote and canvassed on behalf of her brother who finally won with a majority of nearly 6000. All the hard work and commitment had paid off.


Ronald and Anthony Cartland were both killed in the Second World War. At the entrance to Tewkesbury Abbey in Gloucestershire there is a Calvary erected to the memory of Barbara Cartland's Father, Mother and two Brothers. Cartland Road in Kings Norton is named after the family. Barbara Cartland went on to write a biography about Ronald which included his best political speeches. In 1936 Barbara Cartland married Hugh McCorquodale, an officer of the Queen's Own Cameron Highlanders and who had received the Military Cross for Gallantry. The couple had two sons, Ian and Glen. Barbara Cartland speaks fondly about the family visits to Scotland.


" I travel all over the world. I am thrilled by the exotic beauty of the East and the vital virility of the West.


But as I turn for home, my heart is in the Highlands"


Barbara Cartland lived at Camfield Place, Hatfield, Hertfordshire. The family still own the Estate which was originally settled on by a Knight in 1275. It once featured a Tudor Manor House which was pulled down by Beatrix Potter's Grandfather who rebuilt the house in 1867. Beatrix Potter wrote that Camfield was the place that she loved best and where she wrote "The Tale of Peter Rabbit. The estate features an Oak Tree, planted by H.M. Queen Elizabeth in 1550 whilst she was imprisoned at Hatfield. 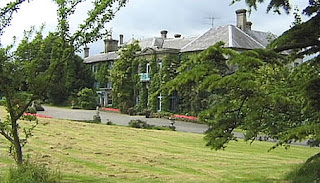 Camfield Place, Hatfield, Hertfordshire.
In 1989 Barbara Cartland was the first person ever to appear twice on the famous television show 'This is your Life' Barbara Cartland has championed many causes and taken part in a variety of projects. She has been a County Councillor for nine years, drawn attention to the condition of Housing and Homes for the elderly and even had the law changed in order that Romany children should go to school. This was one of the most unpopular causes she had ever attempted but the provision of camps for Romany gypsies is down to Barbara Cartland. She helped set up fourteen county council camps in Hertfordshire and other counties followed suit. There is even a camp named after her - Barbaraville!
You might be tempted into thinking that Barbara Cartland lived in a fantasy pink world of imagination if it were not for the fact that she has achieved many great things. Her interests have been extensive and she has even written countless books and articles about health and encouraged the use of alternative medicine. In fact, Barbara Cartland answered 40,000 letters a year, of which, 30,000 were about health. She frequently wrote journals and reports about health products which was unpaid work. This is a lady who was very much 'in touch' with the modern world.
Barbara Cartland was awarded for Achievement by Prime Minister Chirac of France the honour bestowed upon her by the City of Paris in a country where over thirty million copies her books had been sold. Since this time the figure has risen to over sixty million.
Barbara Cartland always had a soft spot for Birmingham and visited it regularly for appearances on Pebble Mill and Birmingham radio stations. She gave many interviews to Birmingham newspapers and in particular the 'Birmingham Post' and she always said she was delighted to have been born in a great city and proud of everything that Birmingham had achieved.
Barbara Cartland touched so many lives. Our thanks go to Ian McCorquodale for providing us with his mothers final farewell - "How I want to be Remembered", a document detailing her family history and an insight into her ninety six years which have been saddened by family tragedy and ecstatically happy through her love of her family.
Barbara acknowledges that she has been shown great kindness and also a certain amount of teasing and ridicule by the Press. However, according to her publishers she has produced 724 books, sold over a billion copies and entered the Guinness Book of Records as the best selling author in the World. Published in every country this amazing lady can afford to rise above those who might make fun of her. This marvellous woman is beyond ridicule and has no need to prove anything to anyone. The facts speak for themselves. Barbara Cartland is the most successful writer of romantic fiction of all time. And - she was born in Birmingham!
Barbara Cartland was an amazingly prolific author. When her books were selling so well in the late 1970's, her American and English publishers came to her and asked for more Barbara Cartlands to satisfy the demanding audience.
She then doubled her output from 10 books a year to 20 books a year, and this at the age of 77! She kept this up, extraordinarily for 20 years, between the ages of 77 and 97. This is something that has never been achieved before by any author.
Eventually, even her publishers could not cope with her output and when she died in 2000 she left a legacy of 160 unpublished manuscripts which are now being published by her son, Ian, on the internet and by mail order, under the banner of the Barbara Cartland Pink Collection.
Will there ever again be a writer with such genius and prolific writing skills?
Awards
1945 - Received Certificate of Merit, Eastern Command, for being Welfare Officer to 5000 troops in Bedfordshire
1953 - Made a Commander of the Order of St.John of Jerusalem. Invested by H.R.H. The Duke of Gloucester at Buckingham Palace.
1972 - Invested as Dame of Grace of the Order of St.john in London by The Lord Prior, Lord Cacia.
1981 - Recieves 'Achiever of the Year' from the National Home Furnishing Association in Colorado Springs, U.S.A. for her designs for wallpaper and fabrics.
1984 - Receives Bishop Wright Air Industry Award at Kennedy Airport for inventing the aeroplane-towed Glider.
1988 - Recieves from Monsieur Chirac, The Prime Minister, the Gold Medal of the City of Paris, at the Hotel de la Ville, Paris, for selling 25 million books and giving a lot of employment.
1991 - Invested as Dame of the Order of the British Empire, by H.M. The Queen at Buckingham Palace for her contribution to Literature.