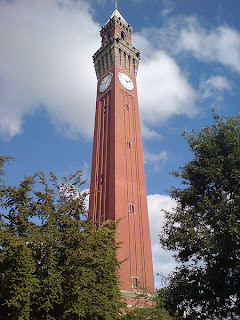 This prominent landmark known locally as 'Old Joe' was built to commemorate Joseph Chamberlain. It is a Grade II listed building and can be seen for miles around.

The tower is based on the Torre del Mangia tower in Sienna in Italy and was designed by Aston Webb and Ingress Bell, two London based architects who designed the construction of the tower which was completed in 1908.

The tower is made of red brick and was built from the inside out without scaffolding. The pointing of the brickwork took place after the tower was built in 1914. It has been re-pointed twice since.

This was once the tallest building in Birmingham until BT Tower was completed. It is 110 metres high. It has a base of solid concrete which rests on bed rock, the tower bells weigh some 20 tons.

Students and visitors were at one time able to access the tower which has a single ( electric powered ) lift shaft running up the centre of the building. Unfortunately access was restricted after a suicide.

The clock was built by Joyce of Whitchurch and the clock face measures 5.25 metres across. The clock hands are made from sheet copper.

At the base of the tower and carved in stone are the words:
This tower commemorates the founding of the university through the initiative and active encouragement of its first chancellor the Right Honourable Joseph Chamberlain.