Fort Dunlop, the site of the former tyre factory which was built in 1916 was left derelict for years until money became available through Advantage West Midlands the Regional Development Agency.
This used to be one of the world's largest factories but with money from Advantage West Midlands it was converted to retail and multi purpose use. 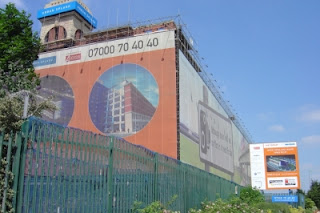 From the M6 or on-route to Castle Bromwich and during the period of its construction it had one of Europe's largest permanent billboards. At a cost of £50 million the site has been tranformed.

With offices, retail units and a hotel, the complex was constructed by the developers Faithful & Gould, the same company that worked on Brindleyplace. It stood empty for 20 years but finally opened again in 2006. The developers website describes it as the largest speculative office building outside of London, with over 300,000 sq ft of office space, 45,000 sq ft of retail space and a 100 bedroom hotel. It is now established as a destination for business and enterprise.
Further details: www.urbansplash.co.uk