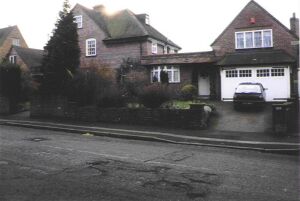 Frederick William Lanchester lived, in a house designed by himself, at 128 Oxford Road, Moseley, from 1924 until his death in 1946. He is best known for designing and building the first British petrol driven four wheeled motor car (in 1895), and for his work on the theory of flight and design of aircraft.

This is described in two books on Aerial Flight (1907 and 1908) which led to laws which are still used in the design of aircraft. Lanchester's deduction of military combat rules (linear law and N-square law) have been developed for use in operational research and by the Japanese to describe competition and marketing.

Thanks go to the Moseley Local History Society for the provision of this information.
Posted by Editor at Saturday, June 02, 2012