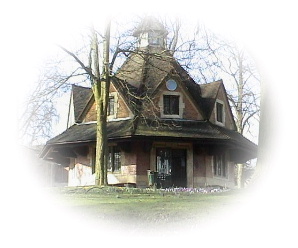 Born in Edgbaston 1839 George Cadbury was the son of a tea and coffee dealer John Cadbury. The family were members of the Society of Friends and sent George to the local Quaker School.

George's parents were both in ill health and in 1855 his mother died, this took its toll on his fathers health, and George at the age of 22 and his elder brother, Richard took over the family business.
After running the company for five years the brothers were the first company in Britain to sell cocoa, sold in a powder so customers could add water or milk for a popular tasty drink.
Despite running a large company George Cadbury dedicated a lot of time to help those less privaleged than himself his local community, teaching classes at the Birmingham Adult School. He felt he would like to give something back to the community in acts of genuine helpfulness.
In 1879 the factory had outgrown its premises and a new site was chosen four miles outside Birmingham. The factory was named after the small stream that ran through the site 'Bournville', this site became known as 'the factory in a garden'.
Cadbury strongly believed that if you look after your employees they will look after your business, so he built his workers houses, he grouped them around cul-de-sac's and gardens to create a community, later he built a hospital, reading rooms and wash houses.
This village became known as Bournville, still run by the Bournville trust today. Gaining a reputation as a good employer the Cadbury's brothers also indroduced half days on a Saturday and Bank Holiday closing, a wide variety of sporting and recreational facilities, a works canteen and medical and dental treatment, a far cry from the sweat shop workhouse conditions.
This ensured they had a motivated and highly productive workforce which were given something in return for their loyalty to Cadburys.
George Cadbury believed that if each man has his own home, a garden to cultivate and peaceful surroundings then there was a better opportunity for a long healthy happy life for him and his family, and in providing his workforce with these benefits he believed this would boost the moral of workforce to the benifit of both the company and the individual.
In 1897 Cadbury's made their first chocolate bar, using fresh cream milk to make it a lighter coloured more tasty chocolate, it was called Cadbury's Dairy Milk and soon became Britain's best selling chocolate bar.
George Cadbury invested all his money in businesses in which about these businesses he is quoted as saying "Nearly all my money is invested in businesses in which I believe I can truly say the first thought is of the welfare of the work people employed".
George Cadbury was a highly respected successful businessman that had a lot of influence in the local area, he was a strong supporter of William Gladstone and represented the Liberal Party on both Birmingham Town Council and Worcester County Council.
In 1901 he purchased the Daily News and used it to campaign for old age pensions and against sweated labour. He paid £60,000 into a pension fund for his own workers to make sure his own employees were looked after in retirement.
Cadbury's home was Northfield Manor and he had a new building constructed in the grounds to hold 700 people, every year in the summer months in this building he provided entertainment and food for deprived children from all areas of Birmingham.
Disillusioned with the government for its involvement and behavior during the first world war he switched his financial support to the anti-war Independent Labour Party. George Cadbury then joined with E.D.Morel, Ramsay MacDonald, Arthur Ponsonby, Arthur Rowntree and other critics of the government's foreign policy to form the Union of Democratic Control (UDC). The UDC became the leading anti-war organisation in Britain
George Cadbury died at his home Northfield Manor on 24th October 1922.