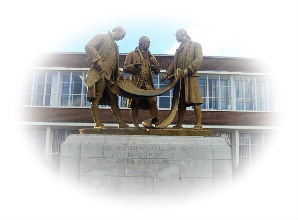 Matthew Boulton always played an active role in society. He was involved with the establishment of the Birmingham Theatre and the development of the General Hospital. It is however the Lunar Society for which he is most famous outside of his career pursuits in business.

The eighteenth century was a time of change and intellectuals and gentlemen including ordinary men of the wealthier classes would organise talks and a host of clubs would allow the members the privelage of feasting and drinking whilst meeting with like minded people to discuss anything from scientific papers to philosophical topics.

The Lunar Society was one such club. It was not the only one to be called Lunar Society as several also existed outside Birmingham. The Birmingham Lunar Society was just more well known. The name has its origins in the fact that they met on a full moon. The better light ensured a higher attendance as generally the streets were unpoliced and very dark.

The Birmingham Lunar Society was very particular about who was allowed to be member. Pretty much an exclusive club it never had more than fourteen members. Each member was noted for their special area of expertise. Boulton was key to the Lunar Society, having invited his most learned friends and generally hosting the meetings at his residence at Soho House.

The society was formed around 1765 and brought geologists, chemists, scientists, engineers and theorists together to discuss new inventions and new ideas. The most frequent atttendees were Boulton, Watt, Murdock, Small, Withering and Priestley. Erasmus Darwin and Wedgewood all contributed to the ideas and visions that were shared at the Lunar Society.

The Lunar Society was held together through the keen interest of its members and to some extent the personal friendship that developed as a result. Matthew Boulton, born in 1728 and the son of toy manufacturer did not have a university education. However, history would dictate that he became one of the pioneers of the Industrial Revolution.
Posted by Editor at Saturday, June 02, 2012