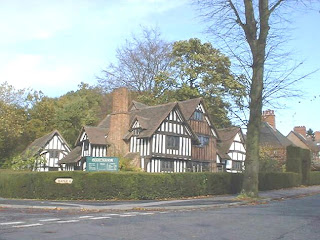 Selly Manor is one of Birmingham's oldest buildings. It used to stand in Bournbrook Road. After many years of decay and neglect it was decided that the building would be demolished to make way for new developments in Bournbrook. George Cadbury decided it was worth saving and arranged for the building to be taken down piece by piece and transported to its current location and re assembled.

When restoration commenced in 1912 it was put back together so that it would resemble its original Tudor style and build. In 1917, upon completion, it was opened to the public. It was then handed over to the Bournville Village Trust. A fascinating story and an interesting building. Laurence Cadbury (George Cadbury's son) collected furniture from all over England in order that it might look as it would have done in the 18th century.

Minworth Greaves, the building in the grounds of Selly Manor was also moved to its present location by the Cadbury's and reconstructed. A medieval hall, it now houses exhibitions and is the Selly Manor gift shop and offices.