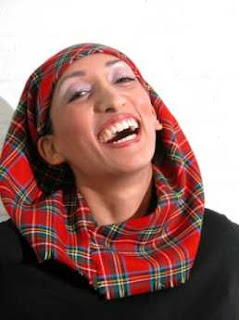 Shazia Mirza, born in 1975, is an exceptional comedian from Birmingham. A young Muslim women in stand-up comedy, often not approved of by her community or even her own family, she is an inspiration to many others. In 2003, she was listed in The Observer as one of the 50 funniest acts in British comedy.

Shazia Mirza - known for her deadpan remark "My name is Shazia Mirza. At least, that's what it says on my pilot's licence" has sometimes been criticised for this and similar ‘in your face’ comments. Shazia would regularly perform her comedy acts in the hijab dress. Perhaps for some an acquired taste though I feel that for the majority she is downright hilarious and a refreshing change.

What Mirza is able to do so well is highlight prejudice and draw it to our attention in the best way possible – through laughter. Her ability to make a point and make it well is influenced by her astute observations of daily life as a modern and forward thinking Muslim in Britain today.

Along with celebrity status Mirza has received more than her fair share of hate mail. She has also been punched in the face for telling jokes in public as a Muslim and had to suffer countless remarks referring to her use of the hijab. Again, her wit wins through as she mentions in one article “For a time, it became so much about the hijab, I felt like sending it off to do its own interviews”

More recently Shazia Mirza has toned down her act and her comedy style has changed as she appears with a collection of stories from real life experiences. This all makes for thought provoking and funny entertainment - complete with added realism. There is never a dull moment with Shazia Mirza around.

Shazia Mirza, as a practicing Muslim, will keep a safe distance from having pre marital sex. She may be non drinking and non smoking and with a message to tell the world, but that does not make her boring – Not a chance. She is vibrant, very amusing, and has a charm all of her own. Mirza has had a tough time of it – but she wins through. Anyone with a stereotypical image of Islam could learn a lot by watching one of her shows.

With Madonna as her role model and with no sign of any lack of new material in her acts – Shazia Mirza should be around for a long while yet. We sincerely hope so. Birmingham has yet another home grown comedian it can be proud of.

Please visit the website for more information and a fascinating insight into what makes Mirza tick….