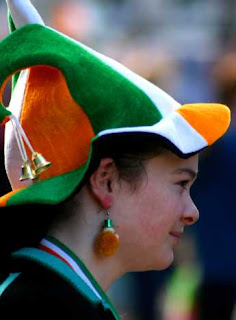 Birmingham has long been home to a large and vibrant Irish Community. The Irish Quarter of Birmingham centres around the Digbeth area which is soon to be the scene of a multi million pound transformation with a host of new business and domestic housing projects. The Irish community in Birmingham number around 140,000 people.

This year Birmingham will experience a weekend of organised events to celebrate the patron saint of Ireland and its people. Birmingham hosts the world’s 3rd largest St Patrick’s Day Parade with only New York and Dublin being larger.

If you get the chance you should take part and experience this colourful occassion. You will see live music and entertainment, a parade with floats and a theme titled ‘Come as you came’ which, if you are Irish, should reflect the clothes you wore when you first came to Birmingham. Irish culture will be represented in the form of Irish dancing and gaelic sports will take place and end with a grand finale and the annual St Patrick’s Day Parade with a major Irish music festival in Centenary Square.

This is one of Birmingham’s premier events. Traditional Irish food and drink will be available and stalls representing Ireland and the Irish way of life will be there to provide information and goods.

Birmingham's St Patrick's Day Parade Festival will take place on Saturday the 12th and Sunday the 13th of March. The parade of 2003 drew over 130,000 people and got rained out in 2004 with only 70,000 people lining the parade route. Help make this a memorable occasion and support it with your attendance. You don’t have to be from the Emerald Isle to take part. Everyone is welcome.

On Saturday Irish pipe bands and Irish dancing will take place in Victoria square with live music on stage between 11am until 4pm. There will be a regional dance challenge and Irish films at South Birmingham College.

Sunday will kick of at 9.30am with Mass at St Anne’s Church in Alcester Street, Digbeth, followed by the 10th St Patrick’s Day parade which will start at Camp Hill and take the route through High Street Digbeth to the Bullring by St Martin’s Church, back down the High Street and into Meriden Street, through New Canal Street and ending at Millenium Point where there is a concert.

Click here for photos of the St Patrick's Day Parade