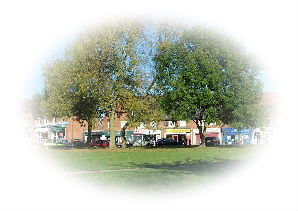 Weoley Castle expanded rapidly in the 1930's and is not as established as the older areas of Birmingham with their Victorian housing. By contrast the housing is more spacious and there are plenty of opens spaces. The first mention of Weoley Castle appears in the Domesday Book of 1086 with the owner of Weoley listed as 'Awold' The actual castle was recorded as belonging to 'William Fitz Ansculf' who lived at Dudley Castle and actually owned most of the Birmingham area as we know it today.

Weoley Castle itself was never really a true castle. It was more of a fortified manor house, surrounded by a moat with a defensive wall and watch towers. The excavations at Weoley Castle have revealed that the manor included a brewery, a bakery, a chapel, Great Hall, kitchens and various living quarters. In later times the castle was rebuilt and eventually deserted, the stones being used by the local community for new buildings.

Weoley Castle was purchased by the city council in the 1930's and excavated. Many of the objects can be seen at the Birmingham Museum and Art Gallery. Examples of these include a Communion Cruet which dates back to 1325, glassware, ceramics and German stoneware. Many household items of the day were also found, along with coins and tools. Weoley Castle is currently closed to the general public for essential repairs but the site has been opened for viewing on several occassions.

Weoley Castle Square, the hub of the community in Weoley Castle is due for redevelopment. It provides a wide range of local shops and amenities. The Woodgate Valley Park is close to Weoley Castle which borders Northfield and one of the main routes (Bristol Road) into Birmingham.