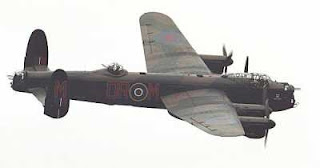 The Avro Lancaster was one of the most famous fighting machines of the Second World War. A total of 7,737 Lancasters were produced. The crew of seven included a pilot, navigator, flight engineer, wireless operator, two gunners and a bomb aimer.

This bomber aircraft could carry a heavy payload of up to 14,000 lb in its 33 foot bomb bay. With specially adapted bomb doors this payload could be increased to 22,000 Ib. Capable of a maximum speed of 280 mph at 15,000 feet, this was a formidable weapon in the RAF's armoury.

Defended by 8 x 7.7mm Browning machine guns in three turrets this was no sitting duck and it had the capability to fend off a number of attacking aircraft. However, as with any heavy bomber, its vulnerability to moden enemy fighter aircraft led to it being used primarily as a night bomber.

Many will remember the film the "Dam Busters" which re-inacts the actions of bomber crews in the 1943 Operation Chastise in Germany's Ruhr Valley.

Here in Birmingham the Lancaster was built by the Austin Motor Company at its works in Longbridge, and it is regarded as being the finest British heavy bombers of the Second World War.
Due to its unique design and ease of construction the Lancasters were built fast and efficiently at a high rate of production which contributed considerably greatly to the war effort.

The German battleship Tirpitz was attacked by Lancasters on numerous occassions until she was finally sunk on 12th November 1944 by 12,000 lb bombs from Lancaster bombers.

Between 1942 and 1945 the Lancasters dropped 608,612 tons of bombs in 156,000 operations. Over 3,000 were lost in action. Only two fully working air-worthy Avro Lancasters remain in service. One of thes is used in the Battle of Britain Memorial Flight and the other belongs to the Candadian Warplane Heritage Musuem.