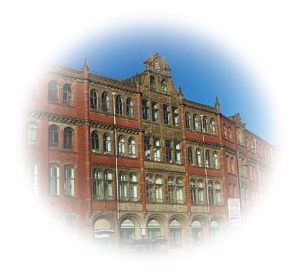 Digbeth is the old heart of Birmingham. Everything started here. Life used to revolve around the market and later the church. The River Lea provided water for its earlier settlements. In the Domesday survery of 1086, Birmingham is shown as belonging to William Fitz-Ansculf from Dudley Castle and Birmingham was valued at only £1.

Birmingham really started with permission being granted for a market in 1166 to a Peter de Birmingham. This brought traders together from the surrounding hamlets and villages. The reason for it being called the Bull Ring is the granting of a license to a certain Mr John Cooper in the 16th century for the purposes of baiting bulls.

The Birmingham market became very popular and the foundations of Birmingham were sown. No one could have anticipated the rate at which it would expand in the future or how strategically and economically important it would be in future years.

The first Norman church was built where St Martins now stands. The area of Deritend on Rea is recorded as having tanneries. A census in 1536 shows a population of just over 1,500 people.

Digbeth with its famous market was also well known for metal manufacturing and supplied arms to Cromwell during the English Civil War. During the Industrial Revolution and the arrival of the canals and railways Digbeth was a highly concentrated hive of activity.

Digbeth has some fine buildings. Most of these are classical 19th century buildings comprising of factories, mill buildings, warehouses and more elaborate buildings used for offices or company headquarters in bygone years.

A classic example of one such building is the Custard Factory where Birds produced their famous custard products. Today Birds Eye Walls are in Gloucester but the building now houses small companies, artists and multimedia studios and has become the in-place to get creative.

The Old Crown dates back to the mid 14th century and is one of the oldest buildings in Birmingham. Curzon Street Station by the newly built Millenium Point still has its rail connections running in and around Digbeth. Current plans are for trains to begin to run again from Moor Street Station by the Bull Ring.

Digbeth is also home to Typhoo Tea with their old factory in Bordesley Street. Production of tea at this site ceased in the 1970's when Typhoo moved to Merseyside to a brand new factory. Brylcreem was invented and produced in 1929 in Bradford Street at the Chemico works.

People think of Digbeth as the run down area of Birmingham just behind the Bull Ring. Digbeth has been through a period of neglect and it is true that many of the buildings are run down. However, some of the city's oldest buildings and oldest pubs can be found in this part of the city.

You will find that the Irish Community is very vibrant around this area and there are several Irish pubs and clubs in Digbeth. In fact there are many businesses still trading in the industrial warehouses and lock ups around Digbeth.

With the regeneration and new development around the Bull Ring, the Digbeth area is being given a face lift. New companies are moving to the area and property prices have risen sharply in recent months.

Perhaps this historical part of the city is about to get its second wind. With the Chinese Quarter, Arcadian, Millenium Point and the new outdoor and indoor markets just a stones throw away we have a sneaky suspicion that Digbeth will once again become the "in place" to be.
Posted by Editor at Sunday, May 27, 2012