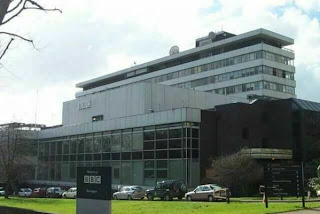 The BBC building formely known as Pebble Mill, in Edgbaston, was built on land that was acquired by the BBC in 1951. However, it wasn't until 1967 that planning permission was granted on this nine acre site.

The building was opened by HRH Princess Anne on the 10th November 1971. This was the first building in the UK to be purpose built as a broadcasting centre.

The broadcasting centre was orginally designed for three studios but the third was never completed. The seven storey building was home to television and radio studios, canteens, a post office and gardens.

Additionally the building was in poor condition. It was going to cost a lot of money to refurbish and replace the cladding that was falling off the structure. A decision was made to vacate the premises and move the studios to the The Mailbox in 2004. 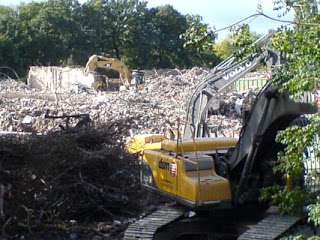 During the summer of 2005 the contents of Pebble Mill were auctioned off and the demolition crews moved in. By the end of September Pebble Mill had been reduced to a pile of rubble.
Posted by Editor at Sunday, June 03, 2012