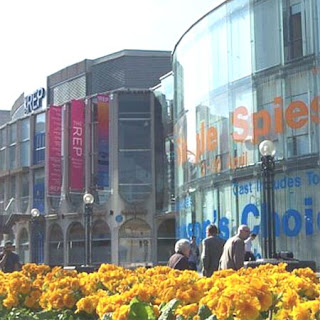 The Birmingham Repertory Theatre or The Rep as it is known locally, is located in Centenary Square in central Birmingham.

This influential and famous theatre was formed in 1913 by Barry Jackson who broke ranks with theatres of the day by promoting what can only be described as 'risque' productions.

It has faced closure several times in its history and was baled out financially by the Birmingham Civic Society or Birmingham City Council which orginally founded the Repertory Theatre Trust. In 1971 the theatre moved to its present location
.
The Birmingham Youth Theatre performed here during the 1970's and 1980's and the theatre was extensively refurbished during the building of the International Convention Centre.

The Birmingham Rep produces around 20 productions a year and has been host to many internationally acclaimed actors, designers and directors.