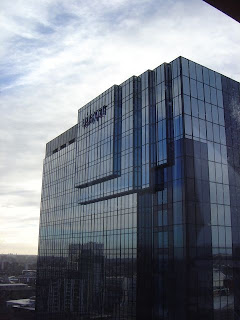 The Hyatt Regency Hotel on the corner of Bridge Street and Broad Street was purpose built as part of the general redevelopment of the area and connected by a bridge to the International Convention Centre.
The building stands at a height of 75 metres and is a prominent landmark with its shiny glass facade. Built in partnership with the Birmingham City Council and the Hyatt Corporation it originally cost £37 million to build.
In 2002 the hotel was sold to the London Plaza Hotels but the Hyatt Regency Birmingham continue to manage it. Located in the centre of Birmingham this luxury hotel has all the facilities one could expect for the international visitor and for business and leisure trips to the city.
With its luxury rooms, including an exclusive Presidential Suite, the upper floors provide some very scenic and panoramic views of the city of Birmingham.