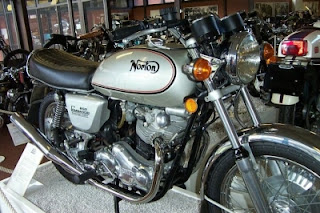 Norton is probably the most well known of British Motorcyles along with Triumph. Both marques have their birthplace in the West Midlands. Norton Motorcyles are loved and cherished by owners around the globe.

Norton's began in 1898 with James Lansdowne Norton producing chains for bicycles. The company was orginally based in Wolverhampton. It wasn't until 1902 that the first Norton Motorcycle was produced with a Belgian Clement Engine. Norton's achieved success due to its sale and production of motorcylces for the military. In Word War I Nortons even supplied the Russian Army.

By 1913 and trading under the name of Norton Motors Ltd, the company was already making a name for itself and winning presitigious races. Now based in Birmingham it was to produce world class motorcycles and break many racing records. Norton Motorcycles became a great success and famous at the Isle of Man TT races where it won consistently and every year from 1947 to 1954 was dominated by the Norton team.

James Norton died in 1925 and Norton went on to establish its brand and loyal following of enthusiasts. During the Second World War Nortons produced around 100,000 military machines. Norton was particularly successful in exporting to the USA where it now has a large loyal and faithful following.

Success at the Daytona and its domination in USA and Europe did not however prevent it from falling into financial difficulties as early as 1953 when it was sold to a company called Associated Motorcycle Ltd. Low production, rising costs and competition hindered Norton as it strived to make a profit.

A line of famous well known bikes followed and continued to do well on the track. The Navigator, Manxman, Dominator produced bigger and faster bikes. Poor sales forced Associated Motorcycle Ltd to sell out to a company called Manganese Bronze Holdings Ltd in 1964. 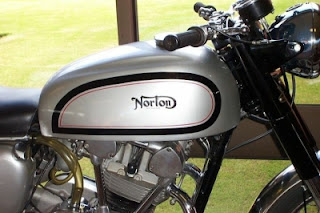 To avoid liquidation the company changed its name to NVT Engineering Ltd but was itself in liquidated in 1976 though still producing motorbikes until 1977. The last Commando finally rolled off the production line in Britain. Heavy imports of Japanese motorcycles, increased production costs, strikes of the seventies and shortage of funds finally forced Norton into defeat.

In 1987 Philippe Le Roux and investors formed Norton Group PLC and in 1988 the company started to produce again in Lichfield. In 1992 Nortons won the Isle of Man TT races once again. The F1 Norton was heralded as the 'Porsche of the Motorcyle world' by Le Roux who then swiftly departed from the company in 1991.

What happend afterwards is difficult to ascertain. Nortons faced an enquiry by the Department of Trade & Industry which investigated the activities of those involved with the Nortons Group. In 1993 ownership of the Norton name and brand ended up with a Canadian Company and merged with March Motors in 1998. They are now called Norton Motorcycles once again. With the decline of the British Motorcyle Industry the Norton Brand has seen many interuptions and hiccups in its production. The current website of Norton in the USA states:

Today, Norton has the consensus support of both the industry and the Norton faithful. The new company is committed to restoring the luster to the brand and carrying the Norton torch as if the original Norton Motorcycles were still in business today.

From the company website we here of the launch of a new Norton........

The Norton 952 Commando is the future. Originally designed and built from the ground up, this bike continues the Norton legacy of defined style and performance. Norton motorcycle enthusiasts will recognize the integrated styling of vintage Commandos with a touch of modern flair.

This modern roadster reflects the soul of the original machine. Classic sculptural forms are combined with raw functionalism, laying beautiful shapes over a structural frame and muscular motor; resulting in a visual language that is both sensual and purposeful. With a very narrow waist and curves in just the right places, the 952 is a bike that feels as good as it looks. 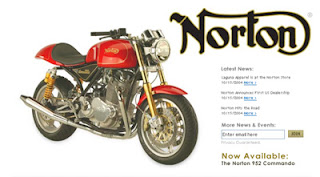