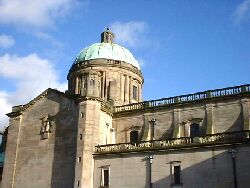 Pretty unimpressive building which is harldy noticed as you drive down the Hagley road towards the city. However, don't be fooled. From the car park behind the oratory all is revealed. The photographs here show you what the building looks like. Inside the atmosphere is typically Roman Catholic and it's architecture and splendour is revealed to you.

John Henry Newman is regarded by Catholics as the greatest Englishmen of the 19th century. One of the intellectuals of his time his personal belief and spiritual influence on parishioners was inspirational. Newman was born in London but his association with the city of Birmingham stems from his formation of the Oratorian Congregation of Birmingham in 1848. After several oratory locations in the city the current location in Edgbaston commenced in 1852. Initially a temporary church it was soon followed by a Catholic School.

In 1879 Pope Leo XIII appointed Newman a Cardinal for his devotion and efforts. He died on August 11th 1890.

More about the Oratory can be found at their website:
www.birmingham-oratory.org.uk/

N.B. On visiting England in 1982, Pope John Paul II referred to Newman as 'that pilgrim for truth' who had come to a 'prayerfulness and a wisdom which still inspires us today'. The building of the current oratory commenced in 1903 and was opened in 1909 in honour of Cardinal John Henry Newman.
Posted by Editor at Sunday, June 03, 2012