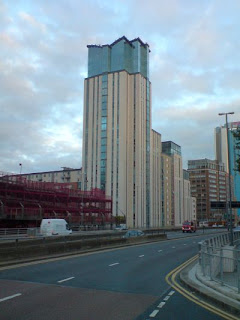 The Orion Building is one of the latest additions to the Birmingham City skyline. Formerly an office block stood on this site, replaced by what is now a high rise residential building  situated on Navigation Street and blending in with the Beetham Tower which is located nearby.

The building was completed in 2007 and features a range of modern one and two bed apartments, four premier suites and a penthouse suite. It is 90 metres ( 295 ft ) in height with 28 storeys.
This is a Crosby Homes development although it was supposed to be a combined effort between Carillion and Crosby Homes.

Suffice to say the two companies had some major disagreements which halted production for a time while the legalities were sorted out. Crosby Homes went on to complete the project alone.
Posted by Editor at Sunday, June 03, 2012