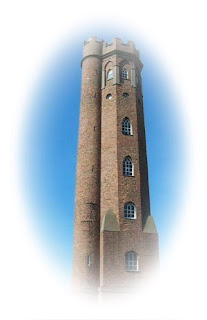 The tower or folly is not actually one hundred feet tall. It is in fact 94 feet high and offers panoramic views of leafy Edgbaston and the surrounding area from its top. Aside from the many stories as to why it was built the real reason probably lies in it being a place to entertain friends. Possibly an observatory. Nevertheless an impressive landmark from which to view the surrounding area.

In the 1300's the area in which the Folly now stands was a large enclosed park of heath and woodland, called Parc de Rotton juxta Birmingham. Much larger than the current park of today this area was prime hunting ground. In 1628 the park was sold to Humphrey Perrott of Bell Hall, Belbroughton. The estate later passed to John Perrott, the last of the Perrotts, who inherited the estate in 1737 at the age of 35. He lived in the large lodge in the park, later known as Monument House, preferring it to Bell Hall. Some twenty one years later in 1758 he built the tower which we now know as Perrott's Folly.

The folly is currently closed and no visits are taking place. Hopefully this landmark will be re opened to the public soon.
Posted by Editor at Sunday, June 03, 2012