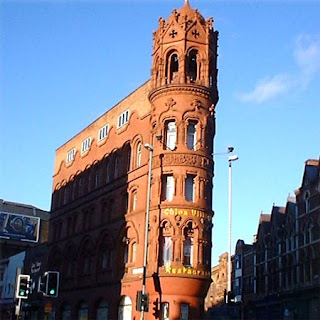 The Red Palace was originally built as a memorial to Lord Roberts of Kandahar, a Commander in Chief of the British Empire. It used to be the HQ of H.B. Sale who moved just down the road to new premises in Summer Lane. Unfortunately it now stands forlorn and mainly empty.

This impressive terracotta and brick building was built in 1896, a design by William Doubleday and James R Shaw on the junction of Hampton Street and Constitution Hill. It is a Grade II listed building.

The original design featured five storeys but only four storeys were built with a fifth, and obviously hasty addition, being added later. The very obvious additional floor has neither the grace nor build quality of the original structure.

A Chinese restaurant called 'China Village' used to occupy the ground floor but they vacated the premises in 2002. Now a Syrian restaurant has occupied the first floor.

The building is in need of somes serious refurbishment which is obvious when viewed close up. This unique and beautiful building could certainly benefit from further investment to restore it to its former glory.