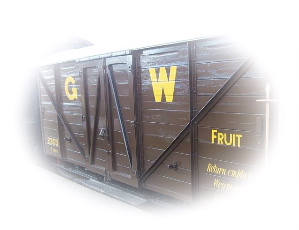 Competition for the building of the new railways was fierce. In total three separate railway companies were competing for railway dominance in Birmingham. The London and Birmingham Railway, the Grand Junction Railway and the Derby Junction Railway all had their own agenda and interests at heart.

The first rail terminus was at Vauxhall and the first rain came from Liverpool in 1837 on the Grand Junction Railway. This was only a temporary terminus and a grand terminal was planned for Curzon Street. In 1838 the line was open and the impressive building in Curzon Street still stands today. The outbuildings and station have now gone but a plaque on the wall reads:

The importance of the railways and the impact on Birmingham commerce can not be overestimated. Manufactured goods could now move at a speed and efficiency that would have been unimaginable a few years previously. Although this issued the death warrant of the canals which would deteriorate rapidly over the coming years, the powerhouse of the world would benefit immensely as a result.
The London and Birmingham Railway company and the Birmingham and Derby Junction Railway were followed by the Birmingham and Gloucester Railway making a total of four railway companies now operating into central Birmingham.

The railways in Birmingham were not without problems. The rivalry was such that competitor railway companies placed obstacles in the way of an integrated network and caused much controversy at the time. The classical example of this power struggle is emphasized by a beautiful and well constructed viaduct at Bordesley that was built at great cost and never carried a train because of the refusal by one company to allow its land to be used to carry the necessary track into Curzon Street.

In 1852 the GWR opened a new station at Snow Hill. This was a much smaller station than New Street and further away from the city centre. Extensive improvements were made in the 1900's before closure in 1972.

New Street Station was detrimental to the passenger services at Curzon Street and consequently it became a freight terminal and prospered as such until the first world war. Competition from road transport in the 1950's eventually caused the closure of Curzon Street. The terminus at Euston which was equally as grand as that of Birmingham was demolished by British Rail in 1962. Birmingham's Curzon Street was more fortunate and protected by Birmingham City Council. It still stands today in its original location.

Snow Hill Station was reopened in May 27th 1999 by Centro and now serves the new metro system from Wolverhampton. New Street is a busy terminus with incoming and outbound all over the UK. It has direct links to the NEC and several inter city stations within the city of Birmingham are still used.
Posted by Editor at Sunday, June 03, 2012