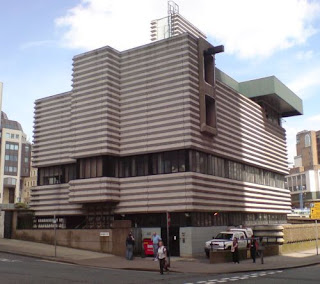 Passers by might cast a glance at this rather unusual building and even question why it is located in this position on such a prime site so near to the city centre. It looks like a modern building and seems as if it is trying to make a statement.

In fact, very few people will realise that this is a Grade II listed building which was built between 1964 - 1966 and designed by John Bicknell and Paul Hamilton, the railway architects that designed many signal boxes around the UK.

The Birmingham Signal Box certainly does not resemble a signal box at all. Although it is close to the railway station there is no need for it to be near New Street at all. Signal boxes are electronic these days and have no need to be sited by the railway lines.

Surprisingly, considering its age, it doesn't stand out badly at all. In fact it almost lends itself to the existing environment.
Posted by Editor at Sunday, June 03, 2012