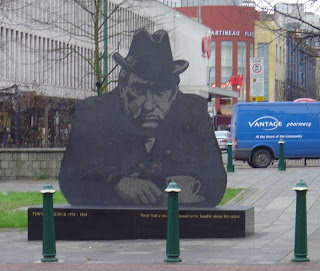 Middle son of Jack and Lily, Tony Hancock was born in Hall Green, Birmingham. Tony lived in Birmingham until he was two years old, then he moved with his family to Bournemouth, where his family bought the Railway Hotel, Tony's father was a semi proffesional entertainer at smoking concerts and masonic functions and many of his friends that visited the hotel were in show business it was here Tony met and was influenced by music hall artistsof the day.

As Tony was growing up his main ambition was to become a comedian like his Dad. Eventually his mother introduced him to a friend of the family George Fairweather, who was in show business to help young Tony find his feet in the world of entertainment. One of Tony's heroes was Max Miller and he used one of Max Millers routines as his first performance, this didn't go down to well, especially as the jokes were rude and Tony himself didn't really understand them. After the bad reception he got from this performance he vowed never to use rude jokes again.

In 1942 after being rejected by the RAF Tony joined a group of comedians, travelling around the war zones entertaining the troops. After the war Tony got his first real break in show business, a six week spell at the Windmill Theatre, his stage work here came to the notice of the BBC and he was given a spot on Variety Bandbox in 1949.

In 1951 he was selected to take over from Robert Moreton as Archie Andrews in the popular radio show Educating Archie, he became well known for his phrase 'flippin kids' and brought him national prominence. Whilst doing this radio show he started to work on a series called 'Happy Go Lucky' which failed miserably but it did bring him into contact with Bill Kerr and Graham Stark, and as a result of its failing two new script writers were introduced to Tony, these were Ray Galton and Alan Simpson.

Tony's success in Educating Archie eventually persuaded the BBC to give him a prominent part in a show called 'Forces All Star Bill', eventually using the Ray Galton and Alan Simpson as his script writers. This show became so popular that the BBC at last gave Tony his own show 'Hancocks Half Hour' which was first broadcast in November 1954.

The team on this show consisted of many up and coming stars such as Sid James, Hattie Jakes and Kenneth Williams. After several successful series on the radio Hancock tried TV, he was contracted to ITV, his script writer was Eric Sykes but the shows were not very sucessful. Tony returned to the BBC using his original script writers, for five years his TV and radio shows ran concurrently, success was measured by the amount of complaints from publicans and shop keepers who protested that it was Hancock that had emptied their pubs and shops.

Hancock and his script writers went on to have many sucessful shows, but Tony wanted more, he became obsessed with improving himself and hungered for international success. His script writers wrote 'The Rebel', although this was well recieved in the UK, it did not penetrate the American market. Hancock told his script writers to come up with a film script that would have a wider appeal for American audiences. They wrote many, all of which were rejected by Hancock.

Galton and Simpson were not paid by Hancock for all their efforts and eventually wrote comedy scripts for the BBC, one was "Steptoe and Son" which took them off in a different direction ending their partnership with Hancock.

Hancock now decided to form his own company with Phillip Oaks and they co-wrote "The Punch and Judy Man" which was far from triumphant even in the UK. Hancock went back to ITV and made 13 more comedy series which by pure coincidence were broadcast at the same time as Steptoe and Son, although Hancock was reasonably well recieved he could not compete with the sucess of Steptoe and Son and eventually returned to the stage.

Hancock saw this as his career failing and began to take to the bottle, his private life started to suffer, and so did his performance. He started to recieve bad reviews, so he turned to Austrailia to make a series of TV shows but by then his health was poor and his performances left a lot to be desired. Eventually he hit rock bottom and commited suicide on June 25th 1968.