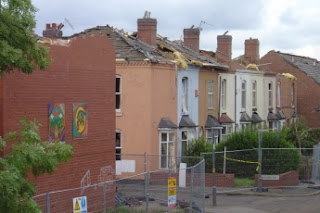 Update: 30th July 2005
Many houses in Birmingham which have been hit by the tornado are thought to be so unsafe they may now have to be knocked down. Surveying the area just one day after the event the scale of the damage is very obvious to any bystander. Entire parks have been destroyed with trees uprooted and tossed around. Small vans and cars litter the side roads. Many roofs are without their tiles and in some cases complete roofs have been ripped away along with much of the surrounding brickwork rendering these properties unsafe.

A Met Office spokesperson said: "This is a tornado with a rating of T3-T4, that would mean it had wind speeds of between 93-114 mph"

One of the most badly damaged areas appears to be around Ladypool Road and the surrounding Sparkbrook. Some roads are still closed today. Police and volunteers are still guarding the properties and the council have started a major make-safe and clean up operation.

Twenty people were injured - three seriously - after winds of 130mph were recorded in Birmingham on Thursday. It is amazing that no one has been killed. The storm has left a trail of debris across Kings Heath, Moseley and Sparkbrook and hundreds of contractors are working on repairing the damaged buildings and making them safe against rain and further damage.

Vans from local forestry are at the scene with wood cutting equipment and shredders in an effort to get the area returned to some sort of normality.

Many people have been staying at hastily prepared centres at Aston University, Balsall Heath Road and at Kings Heath where they have been informed that they may not be able to return to their homes for at least a week. Some will be even more unfortunate. Around 200 of the 1000 badly damaged properties will probably have to be demolished. Structural engineers are still carrying out assessments in the area.

Several onlookers at the scene of the worst damage around Ladypool Road were almost in tears. Home owners they could only look on helplessly as the workers went about the massive clean up operation. This is the worst affected area.

Two people were heard arguing about the clean up costs. One was saying that the government should pay for those that have no insurance while the other was clearly furious at the suggestion of taxpayers money being spent on a fund to help those that hadn't bothered to insure their homes and who were now bleating about how their own lives had been ruined through their own stupidity.

Birmingham was affected by a similar tornado in 1931 which resulted in one death and severe damage at Hall Green and Small Heath. Whilst this is being called a tornado it is nothing like the scale of tornados found in more volatile regions around the world. This was more like a very powerful whirlwind or mini-tornado.

Trees were uprooted and cars overturned as shops and a supermarket were heavily damaged. Homes in the areas were also badly damaged by the freak weather conditions. Twelve people have been injured, some seriously in a storm that lasted around five minutes. Reports are coming in that this is one of the worst tornados ever to hit the UK.

Battered by thunder and lightning roofs and windows suffered most. Debris and tiling from shattered roofing is scattered over pavements and roads in the area. Many cars have been damaged by the tornado.

Police closed off many roads and traffic congestion was still a problem as people began to leave offices and shops and make their way home.

For photo gallery of the Birmingham Tornado click here