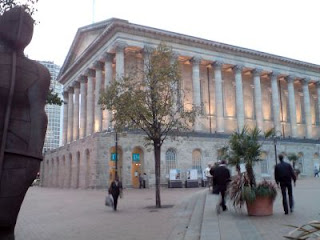 Designed by architect Joseph Hanson ( renowned for the Hansom cab ) but based on Palladio's Books of architecture, the Birmingham Town Hall is an impressive building.

To look at, you could be forgiven for assuming it's construction to be of stone but like most buildings of the 1830's it is built of brick with stone facing. The brick came from Selly Oak.
The town hall is a Grade I listed building which was purpose built for the Birmingham Triennial Music Festival which was established in 1784 to raise funds for the General Hospital. 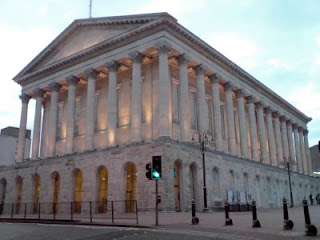 Joseph Hanson under estimated the cost of the project when he tendered jointly with Edward Welch stating that construction costs would be around £8,000 for the building, a considerable sum in those days. This caused Hanson to go bankrupt during the construction.

Additional funds were found to complete the building in 1834 and the Music Festival went ahead despite the project not being completely finished.The pipe organ was built by Hill of London at a cost of £6,000. 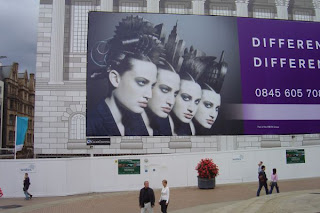 The Birmingham Symphony Orchestra were based here until 1991 when they moved to the new purpose built Symphony Hall.

In 2008 the Town Hall re-opened as a concert hall after extensive refurbishment costing £35 million, with £18.3 million coming from Birmingham City Council and the remainder from the Heritage Lottery Fund and the European Regional Development Agency.

Throughout the periods of reburbishment which lasted several years, various giant advertising sheets were used to cover the building. The Town Hall is once again used for classical concerts, a general music venue and a variety of local events and meetings.