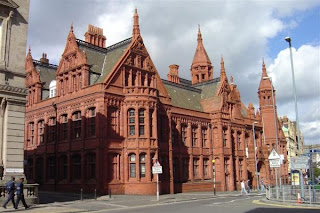 This is a beautiful ornate building in red brick and terracotta.The Victorian Law Courts are a Grade l listed building in Corporation Street. This is probably one of the most impressive courts of its kind in the UK.

Queen Victoria laid the foundation stone in 1887 in her Golden Jubilee year and a statue of her can be found above the arched entrance to the courts.

The courts were opened in 1891 and the building was constructed by a Birmingham firm to a design by Aston Webb & Ingress Bell of London.
Posted by Editor at Monday, June 04, 2012