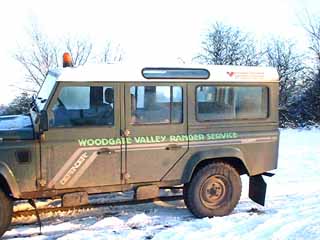 Woodgate Valley Park, near the M5 at Junction 3, has over 450 acres of woodland, wetland and meadows. Many events take place here for the enjoyment of children and the pony trekking is particularly popular. The visitor centre provides information on the park and its events as well as being a place for refreshments.

A local charity operate an independent urban farm within the park boundries which houses domestic animals, birds and pets for the enjoyment of visitors.

The Bourn Brook flows runs through the centre of Woodgate Valley Park. This actually forms the boundary between Quinton and Bartley Green. Along the brook there is evidence of burnt mounds from the Bronze Age, proving that man once lived here around 2500BC.

Plenty of wildlife can be seen here including buzzards and swallows hunting over the fields in the summer months. With plenty of hay meadows and over 250 species of plants having been found, the meadows are a haven to butterflies and wild flowers.

History
This area would originally have been farmland for arable crops and dairy cattle. Records mention Hole Farm listed as a stock and dairy farm in 1344. Hole Farm is now the Trekking Centre and the Urban Farm.

Industry in this area would have included brick and tile making, coal mining and nail making. The Lapal Tunnel is a disused canal tunnel which used to be part of the Dudley No. 2 Canal.

The tunnel is called Lapal after the residential area of Halesowen. Little evidence exists today due to the fact that the canal either side of the tunnel has been filled in.

This area was designated a Country Park in 1984 and is managed by Birmingham's Park Ranger Service. The visitor centre is open daily from 10am - 4.30pm in the winter and 10am - 7pm in the summer.