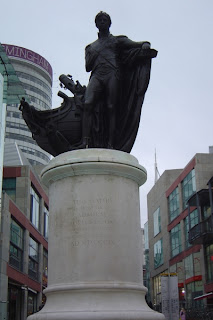 Right in the centre of Birmingham in the heart of the new Bull Ring shopping centre there stands a bronze statue dedicated to the memory of Horatio Nelson.

Now you could be forgiven for wondering why Nelson has been given pride of place in a city that is so far away from the sea. Surprisingly this was the very first publicly funded statue of Horatio Nelson, made entirely from donations from the people of Birmingham in 1809.

Nelson was a national hero remembered for his heroic battles against the French Navy and Napoleon. Nelson visited Birmingham in August 1802 where he received a warm welcome as huge crowds turned out to greet him.

The statue was unveiled on 25th October 1809 on the official Golden Jubilee of King George III
Posted by Editor at Saturday, June 02, 2012